The last of eight children born to Edward and Eliza Pratt young Billy, as he was known, was expected to follow his father, and the majority of his siblings, into a career in the Civil Service. However, instead, Billy harboured a desire to 'tread the boards' and become an actor. 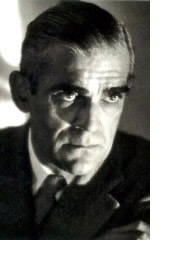 Billy's schooling at Merchant Taylors', Uppingham, and Kings College London was intended to prepare him for a career in Government service. Instead, Billy, neglected his studies and frequented the London where he saw some of the leading actors of the day. Unsurprisingly, his lack of study was reflected in his exam results - he failed them all. An opportunity to escape his chosen path arose when Billy turned twenty-one. He received some money from his mother's estate (both parents had died some years earlier) and determined to leave the country. In May 1909 Billy took ship and sailed, second class, to Canada. His first thoughts were to become a farmer and, for some months, worked on a farm outside of Hamilton, Ontario. After leaving the farm Billy travelled to Vancouver, where he took what jobs he could, often resorting to manual labour to earn a living.

It was here, in February 1910, while working for a real estate company, Billy married for the first time - to British born Jessie Grace Harding. Despite his marriage to Grace, as she was known, Billy's desire to be an actor remained unabated. With no professional acting experience, Billy continued to make approaches to various theatrical companies in the hope of a job. He finally landed a job with the Jeanne Russell Company and left Vancouver to join the troupe. He stayed with the company for over a year touring Western Canada using the moniker 'Boris Karloff' - the surname which, he claimed, originated in his mother's side of the family.

In June 1912 the company arrived, flat broke, in Regina, Saskatchewan. The following day the town was hit by a devastating cyclone. The company disbanded and Karloff got work clearing the debris. After a period of more manual labour Karloff gained employment with a series of theatrical companies, touring Canada and the United States before eventually arriving in Los Angeles.

After a while Karloff began to work as an extra at the local film studios. Over the years the roles grew larger. With the transition from silent pictures to sound Karloff's theatrical training stood him in good stead. In 1930 he received good notices as the killer, Ned Galloway, in the stage play The Criminal Code. When Howard Hawks made a motion picture version of the play, the following year, Karloff retained the role of the killer.

Then one day, as the story goes, Karloff was sitting in the commissary at Universal having lunch. The director, James Whale, spotted him and asked him to test for the role of the monster in his latest picture - Frankenstein. Karloff won the role and, at the age of forty -three, found himself a star. More horror films followed, many of which are now deemed to be classics of the genre: Bride of Frankenstein, The Mummy, The Black Cat, and Son of Frankenstein to name but a few - and became firmly established as one of Hollywood's leading 'bogey-men.'

Yet, Karloff did not work solely within the horror genre. When the public's taste for horror pictures waned Karloff branched off into other genres. He even returned to the stage, most notably for a successful run of the black comedy Arsenic and Old Lace and, in 1950, starred as Captain Hook in the Broadway revival of Peter Pan, starring Jean Arthur in the title role. Five years later he appeared in The Lark on Broadway, with Julie Harris as Joan of Arc. Karloff worked consistently, also appearing on radio and television, and made numerous LP recordings of poetry, drama, and fairy tales.

The much married star fathered one child, a daughter named Sara Jane, who was born on the actor's 51st birthday. Sara now runs Karloff Enterprises, and makes numerous appearances at horror conventions and film festivals.

Boris Karloff worked, practically, up until the end, refusing to retire despite his ill-health. He died at the King Edward VII hospital in Midhurst, Sussex, England on the 2nd February 1969. He was 81.